When in Europe, which is not often, I visit cathedrals and sometimes attend the mass. I’m not Catholic and not even religious but I love the history, and the art and architecture. I’m not a believer but I enjoy the ancient ritual of the Latin mass for its symbolism and its ability to move the human spirit. The two great artistic gifts of the medieval Church in Europe are the Cathedral and the Gregorian chant.

My second favourite cathedral is Notre Dame de Paris. My favourite is Chartres. At 9.00am each Sunday you can attend the Gregorian mass in Chartres Cathedral. It is an uplifting experience even for the unbeliever. 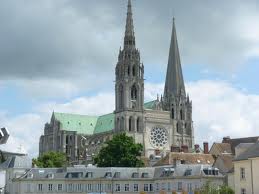 The Cathedral of our Lady of Chartres is one of the finest examples of French Gothic architecture and is a UNESCO World Heritage Site. It has the only set of stained glass windows in Europe to survive almost intact through the many wars from the time they were installed. Chartres is 80 kilometres southwest of Paris, just a short train trip. The cathedral is just a short walk from the station.

Chartres old town is on a hill overlooking the surrounding countryside. The cathedral dominates the hill and as you approach the city you can see from afar the majestic cathedral with its twin spires reaching towards the heavens. The pilgrims of many generations saw this as a symbolic pilgrimage to Jerusalem, to the New or Heavenly Jerusalem represented on Earth by the cathedral. The cathedral’s architecture atop a high hill with its high vaulted roof and tall spires embodies the notion of the Heavenly Jerusalem. The cathedral itself is the Heavenly Jerusalem, at least symbolically. The pilgrims come to the New Jerusalem to pray, to seek redemption or absolution, to renew their faith and to marvel at its beauty. This pilgrim came just to marvel at its beauty and to bathe in the reflected glory of times long past.

In the keeping of the cathedral is its most famous relic the Sancta Camisa, said to be the tunic worn by the Virgin Mary at Christ’s birth. It was gifted to Chartres in 876 by King Charles the Bald (823-877). There are other relics in the cathedral, including bones, said to be the remains of saints. Relics are important for they draw pilgrims to view them and to pray to those saints to intercede with God on behalf of the prayerful. The more important and famous the relic, such as the Sancta Camisa, the more powerful the saint symbolically and physically resident in the cathedral, the more pilgrims are drawn to the cathedral and its city, and the richer both cathedral and city. The Sancta Camisa is on permanent display in the northeast chapel in a modern glass fronted reliquary.

From the 12th century onwards Chartres Cathedral and the Sancta Camisa became one of the most popular pilgrimage destinations in all of Europe, much as the Camino de Compostela pilgrimage to Santiago de Compostela in Spain has become today.

The cathedrals were also the sites of the palaces of bishops, the princes of the Church, and each bishopric was a business. The palace alongside Chartres Cathedral is opulent. At the most important of the cathedrals the presiding bishop amassed great wealth. In their heyday the bishops of Chartres were very wealthy indeed. The immediate area of the cathedral was much like the Vatican is today, a small city within the city in which the bishop reigned supreme, much as the Bishop of Rome today reigns supreme in the Vatican City.

One can imagine the excitement of pilgrims when they first saw the cathedral spires glistening in the sunlight in the distance after weeks or even months of pilgrimage, most often on foot. And how that excitement would have built in the days it took to get to Chartres after the first sighting. And on reaching the New Jerusalem, although physically exhausted, how spiritually uplifted and ecstatic the pilgrim might have felt.

My friends Ben and Jenny once walked the famous Camino de Santiago pilgrimage from northern France right across northern Spain to Santiago de Compostela in the west of Spain, a walk of 30 to 40 days. I admire them greatly. This modern pilgrim arrived at Chartres by train. In a modern secular sense I felt something of the excitement and ecstasy of the pilgrims of old, or imagined I did, on arriving at the doors of the cathedral. In this modern age if you arrive on the Saturday evening before the Sunday Gregorian mass you will witness a light show. The cathedral and other historic and heritage buildings in the old town are all part of the show.

On first arriving at the cathedral we went to book a guided tour and after a short wait with a group of other pilgrims cum tourists our guide Malcolm Miller appeared. Providence had intervened to make this pilgrimage complete! Malcolm was a 72 year old Englishman who had in his youth travelled to Chartres to research and write his thesis on the cathedral. He fell in love with the cathedral and its city and never left, staying to become a leading authority on cathedrals in general and Chartres Cathedral in particular. He had been awarded two knighthoods by the French government for his contribution to the arts, “Chevalier de l’Orde National du Merite” and “Chevalier de l’Orde des Arts et des Lettres”. He was not just a guide. He was an expert, an author of books about the cathedral and a gifted teacher. He sat us down and set about teaching us how to understand the history, the architecture and the stories the cathedral has to tell. He seemed to enjoy the experience as much as we did.

As one approaches the cathedral the most obvious architectural features are the twin spires and the stone flying buttresses that look like giant spiders’ legs propping up the walls of the cathedral, which is exactly what they do. Those buttresses take the weight of the walls which no longer need to provide the full structural strength of the building. They allowed the architects to build higher walls and to open up the walls and fill them with stained glass windows so that they appear, like the walls of the Heavenly Jerusalem, to be ‘garnished with all manner of precious stones’ (Revelations, 21:19.20).

One first approaches the cathedral from the West and enters through the Royal Portal and the West Door. Above the West Door are three 12th century stained glass lancet windows; the Jesse Tree, the Incarnation and the Passion and Resurrection. High above them is the large round 12th century West Rose window depicting Christ’s second coming as judge, or the Last Judgement. 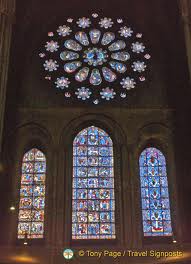 Enter through the West Door and laid out on the nave floor inside is the Labyrinth, an ancient and multicultural symbol adopted by Christianity and quite popular until the 17th and 18th centuries. The Labyrinth is like a maze laid out on the floor with a start on the outer edge facing the West Door and a pathway leading around and around to the centre. In earlier times pilgrims would walk or crawl through the Labyrinth until they reached the centre. That journey through the Labyrinth symbolized the journey from birth to the door of the Heavenly Jerusalem. The Labyrinth at Chartres has often been referred to as “the Journey to Jerusalem”. In other cultures it symbolized the journey from birth to death but in Christian culture there is life after death beyond the door of the Heavenly Jerusalem. 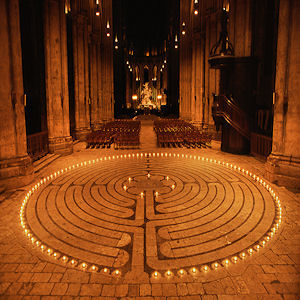 The stained glass windows are the outstanding feature of Chartres Cathedral. Along with the stone statuary on both the inside and outside of the walls they are a book that tells the stories of the Old and New Testaments. The cathedral is the Heavenly Jerusalem. It is also a Bible. In medieval times when most believers were illiterate this was their Bible.

Malcolm Miller took us around the cathedral pointing out the bible stories told by each window and each statue. The statues on the inside and outside exactly match the windows and tell the same stories, but in stone rather than glass. And although the statues are many and magnificent in their own right it is the windows that hold your complete attention, for they are absolutely beautiful examples of medieval craftsmanship. They have all been cleaned and restored to their original state of artistic perfection. There are many windows that include:

As we went he also pointed out the architectural innovations that made Chartres a leading example in its day. This cathedral must surely have represented one of the high points in European art and architecture. The layout of the cathedral was also mind boggling with each part of the very complex plan playing a specific role in the life of the cathedral.

All too soon the tour and lecture ended. But our teacher had whetted the appetite for more and so it was that we bought and read his books, and went again to wander around the cathedral and learn more, and sometimes just to sit in the midst of all that beauty and history and to quietly reflect.

A Gregorian mass in a cathedral is even more inspiring than the cathedral itself. The people, the music and the ritual, at once both solemn and joyous,  bring the cathedral to life. The beautiful voices of the chanted mass soar high into the ceiling of the cathedral, and into the spires, and seemingly onwards to the Heavenly Jerusalem where perhaps the saints are inspired to intercede with God on behalf of the worshipful. Every Sunday at 9.00am at Chartres.

I came away with Malcolm Miller’s books, a small Chartres Cathedral medallion, a bedside lamp with a beautiful stained glass lampshade, memories to last a lifetime, and hope for a return visit before the end of that lifetime.

Though the pilgrimage ends and you leave Chartres and journey home from the Heavenly Jerusalem to your everyday existence Chartres Cathedral never leaves you. Whether believer or unbeliever your life is forever changed in great or small ways. And that I suppose is the purpose of pilgrimage. 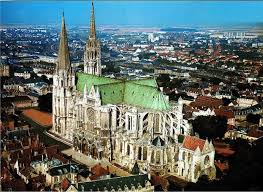 In a future essay “Hikoi ki Hawaiki” I shall write of a pilgrimage to Eastern Polynesia and to Taputapuatea Marae on Ra’iatea.

I have often reflected on the architecture and art of the modern whare whakairo. Its architecture is certainly inspired by ecclesiastic architecture; without the Maori embellishment it looks much like a church. In one rohe in particular there are carved pou alongside the whare that closely resemble the Christian cross. Sir Apirana Ngata was the prime mover behind the revival of traditional Maori art, including the carved and otherwise embellished meeting house. He was of course a staunch Anglican and it is not by chance that the buildings themselves are modeled on the church. Coincidentally or otherwise the embellishment in whakairo, tukutuku and kowhaiwhai also tells a story, most often the story of the hapu that built the whare.

The original Rangiatea Church at Otaki, the church at Tikitiki and the chapel at Hukarere all carved and embellished in the Maori tradition, come quite close to the concept of the European cathedral.

In this modern era when most of the people have dispersed to the four winds the marae and its whare whakairo have become pilgrimage destinations for the dispersed where they seek to reunite with their land, their people, their stories, their history and their identity, and to seek renewal.

This site uses Akismet to reduce spam. Learn how your comment data is processed.